The Eclectic Peacock boutique carries designer clothing options for any occasion. The boutique stocks men and women’s clothing styles perfect for a casual daytime event, or a fun night out with your friends or significant other! Out styles include jeans, t-shirts, tops, and dresses. We carry the latest looks from designers like MAVI Jeans, Silver Jean Co, Robert Graham, Johnny Was, Lucky, Chaser, and more.

Visit the store to see our most recent inventory – styles are always changing!

A Bob Marley classic was on repeat as ‘Johnny was a good man…’ rang throughout the Southern California home of the creators of this trailblazing clothing line. In 1997 Johnny Was clothing was born, and just like the song the brand would become timeless and defy trends. Johnny Was clothing has a bohemian spirit and draws inspiration from all that is genuine, beautiful, and special.

The Johnny Was signature is their intricate embroidery and luxurious fabric choices. The allure of these dreamy clothes speaks for itself. It’s the small details in life that make it so unique, and the same is true for Johnny Was Clothing. Close inspection of these beautiful garments highlights the true craftsmanship behind each look.

HardTail has always believed that the future is female. They believe that real progress goes hand in hand with the empowerment of women everywhere, and they speak from experience.

Twenty-five years ago, the founders, Dick and Patty Cantrell launched Hard Tail, a pioneering lifestyle and active-wear line celebrating female athleticism. At its core: a girls-can-do-anything philosophy, inspired by the couple’s three daughters. Dick and Patty’s vision was to not only create an innovative brand rooted in relaxed California living, but also one that would motivate young women to defy stereotypes, break barriers, and achieve their dreams.

What started as a small company out of the Cantrell’s Los Angeles home in 1992 has evolved into an internationally renowned, family-owned and operated business, recognized as much for its focus on California manufacturing and classic designs as its commitment to strong females everywhere. 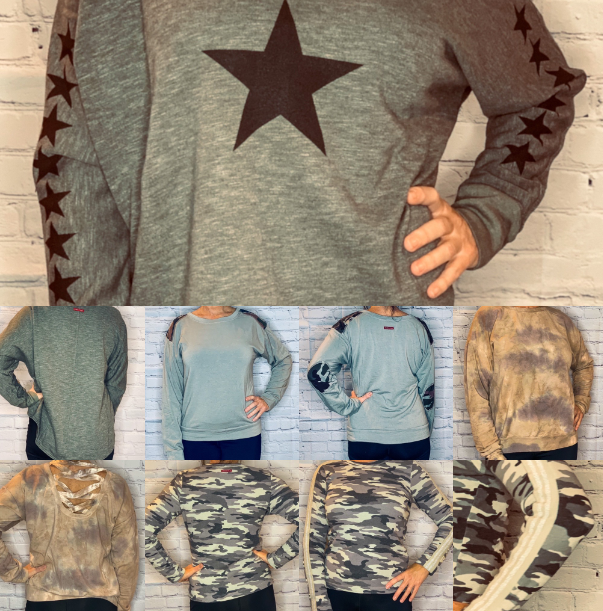 The Vintage Havana brand was born in 1954. Vintage Havana came to life when it brought together a culture made of a variety of designers, merchandisers, artists and manufacturers from all over the world. The brand is a marriage of music, art, architecture, history, travel and fashion made for a feminine spirit intertwined with courageous individuality.

Vintage Havana is a women’s streetwear company focusing on trends of the past, present and future. Products range from novelty knit tops and sweaters to graphic tees, denims and printed dresses — and all offer a versatile assortment of fabrics and patterns. Vintage Havana’s beautiful garments are premium quality and will turn heads no matter the place or time. The future of the brand is forever expanding and the vision is forever young. Find Vintage Havana at the Eclectic Peacock!

In 1978, Brian Smith landed in Southern California with a bag of sheepskin boots and hope. He fell in love with the sheepskin experience and was convinced the world would one day share this love. The beaches of Southern California had long been an epicenter of a relaxed, casual lifestyle, a lifestyle that Brian felt was a perfect fit for his brand. So he founded the UGG brand, began selling his sheepskin boots and they were an immediate sensation. By the mid 1980’s, the UGG brand became a symbol of relaxed southern California culture, gaining momentum through surf shops and other shops up and down the coast of California, from San Diego to Santa Cruz. UGG boots reached beyond the beach, popping up in big cities and small towns all over, and in every level of society. Girls wore their surfer boyfriend’s pair of UGG boots like a letterman jacket. When winter came along, UGG boots were in ski shops and were seen in lodges from Mammoth to Aspen.

The UGG brand began to symbolize those who embraced sport and a relaxed, active lifestyle. More than that, an emotional connection and a true feeling of love began to grow for UGG boots, just as Brian had envisioned. People didn’t just like wearing UGG boots, they fell in love with them and literally could not take them off. By the end of the 90’s, celebrities and those in the fashion world took notice of the UGG brand. A cultural shift occurred as well – people were embracing, and feeling empowered, by living a more casual lifestyle and UGG became one of the symbols of this lifestyle. By 2000, a love that began on the beaches had become an icon of casual style. It was at this time that the love for UGG grew in the east, over the Rockies and in Chicago. In 2000, UGG Sheepskin boots were first featured on Oprah’s Favorite Things® and Oprah emphatically declared that she “LOOOOOVES her UGG boots.” From that point on, the world began to notice.

Chaser Brand is a contemporary clothing line built on rock and roll. The brand dedicates themselves to the evolution of style and fashion, and are inspired to keep pushing the envelope and pushing forward. The line takes inspiration from icons of past generations and puts a modern, uniquely Chaser spin on each garment. Chaser Brand is all about the details. Construction, fit, and luxe fabrics that feel amazing all reign supreme.

Whether you are dressing up or dressing down, Chaser has a garment for you. They are the authority on cool. The line is always experimenting with new dyes and yarns to create walking works of art that are easily identifiable as a Chaser creation.

XCVI is the creation of Gita Zeltzer and Israeli born theater actress and director. She believes that “playfulness cultivates joy, diversity fosters creativity, and that art should be integrated into every human experience”. She noticed that casual-wear clothing lines were lacking these elements, and most of the time, wear casual-wear meant looking sloppy. It was 1996 (XCVI in roman numerals) that she launched her first collection which showcased the intersection of lightheartedness and refined elegance that was missing in the casual-wear market.

Over the last 20 years, Gita has remained true to her vision and has created beautiful works with her customers in mind. Today, Gita’s daughter runs the business, always keeping in mind that fashion is meant to enrich the lives of those that wear the clothing, and should bring them joy. XCVI believes “art is life, fashion is human. And XCVI is fashion you can live in.”

Our fabrics are very tactile and feel amazing on the body; one of our biggest compliments is that many women report their pete tops are “ go to pieces” in their closets. That was a key reason that pete was endorsed by Oprah as one of her favorite things! When they need to wear clothes that will serve many situations in a day- they put on their pete and always feel together, and comfortable. Women wear many hats; we are proud that pete serves them well in both offering comfort and confidence.

The Nu Vintage clothing line was created in 2001 by Jacques Artine Kevorkian. He dreamed of creating innovative clothing, with a vintage feel, which fit immaculately and looked terrific on every customer. Jacques has applied his business school education with his retail and wholesale experience to expand the line internationally. His first Nu Vintage line including many pieces with a euro-fashion feel, and included pieces for men and woman. In 2009, the Nu Vintage launched a line with an emphasis on vintage, hand-crafted looks.

Jacques’ clothing is sold internationally in department stores and specialty clothing stores. The Nu Vintage’s designs are ever-evolving and are inspired by a world full of changing colors and textures. They continue to create clothing with unparalleled quality and creativity in each look.

ReLove is all about reclaiming nostalgia and rescuing your favorite styles from the grips of time, repurposing those looks, and revamping them to create new pieces that you can love over again. ReLove was founded in 2013 by Lisa Lavalle in her home studio. The company has since blossomed into a brand that embodies an image of free-spiritedness and independence. Lisa always felt like something was missing from her wardrobe and decided to create looks that fulfilled her need for unique, one-of-a-kind pieces.

Lisa began her line by creating headbands and keepsakes, which later evolved into home goods, pillows, placemats, and more. She eventually took the plunge into fashion and creating unique vintage inspired clothing. When Lisa was in the process of creating ReLove, she discovered that a large percentage of unwanted clothing ends up in landfills every day. Most of these items don’t decompose and emit CO2 into the atmosphere. In addition to creating beautiful vintage pieces, ReLove is committed to reducing waste and keeping unwanted clothing items from ending up in landfills.

The Silver Jean Co, established in 1991, is a multi-generational endeavor with a rich family history. The company is a brand of Western Glove Works, which was established in 1921 by the Silver family. They are second oldest, privately held denim company in North America. Creating a product focused on fit has lead to Silver Jean Co’s success. Their first pair of jeans were a unisex jean, launched in 1991. Their very first product went on to sell 2 million units, and this was just the beginning.

The Silver Jean Co collection has expanded since the early days. The line now includes styles for men and women in every shape and size – curvy, tall, short, slim, muscular, and everything in between. The Silver design team is made up of real people, that live in their Silver Jeans everyday.

Their background in workwear means that quality and craft is in their genes. Silver jean’s are built to last and are crafted with integrity, authenticity, and sustainability. Where other denim falls short and ends up in a landfill, Silver jean’s will stay in your drawer or closet for years to come.

The Robert Graham trademark style features eye-catching mixed fabrics, one-of-a-kind trimming, striking embroidery, and plenty of bright colors. Each product or garment has a character that is uniquely Robert Graham.

Lucky began crafting great-fitting, vintage-inspired denim in 1990. They created the ‘lucky look’ by literally ripping and shredding the denim. This creates a distressed look that is oozing character and soul. Throw in some authentic hardware and playful details, and the American legend that is Lucky Brand was born.

The Lucky style was inspired by the laid-back, Southern California lifestyle from which the company originated. They took inspiration from the secluded outlooks of Big Sur, to the vintage tattoo shops in Venice, and the pristine beaches of Malibu. They also mix in references to rock and roll, art, and photography – both old and new. This line was created for free-thinkers, artists, and dreamers. The pieces created by Lucky are clothes that you’ll want to wear over and over again. These clothes were made to dance, work, run, jump, play, and rock n’ roll.

MAVI Jeans is an international apparel brand. The brand has become known for their superior quality, fabric innovations, and emphasis on getting the perfect fit. The company was incorporated in 1991. Since then, it has become a leading lifestyle brand.

Mavi Jeans can be found in 34 countries in over 392 stores, as well as luxury department stores and online partner stores. They sold over 7.5 million pieces in denim in 2016 alone!

This brand has a strong reputation in the denim market as an industry leader. They are constantly innovating their product. MAVI partners with the top fabric houses to create a superior quality product.

Shop our online store! Now you can shop your favorite clothing and accessorie brands and them shipped right to your door!
Shop Now!
Copyright The Eclectic Peacock LLC 2021 - All Rights Reserved | Designed by Ashlee Brolly Design Studio
Back To Top